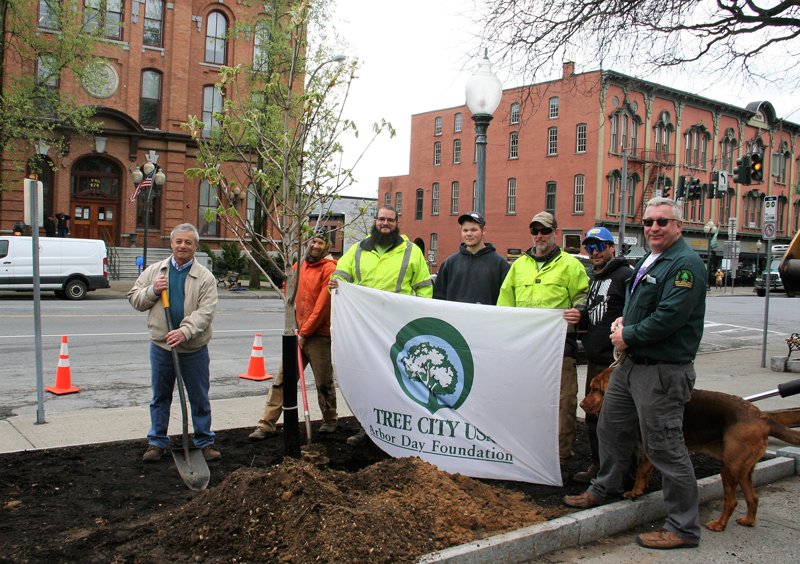 SARATOGA SPRINGS — Commissioner of Public Works Anthony “Skip” Scirocco was joined by the City Arborist, Steve Lashomb, and NYSDEC Regional Forester for Region 5, Jeff Speich, today, to celebrate Arbor Day with the planting of a new tree on Broadway.

The City of Saratoga Springs has been recognized as a Tree City USA, since 2017, by the Arbor Day Foundation, and the planting of this new tree acknowledged the City’s continued commitment to its urban forest.

“The City of Saratoga Springs has demonstrated a real commitment toward protecting and promoting our urban forest. This has included investment from both the City and our community partners. DPW established a successful program managed by City Arborist and Urban Forestry Division to support the Urban Forestry Master Plan and ensure that city trees are maintained and cared for,” said Scirocco, in a statement.

The Tree City USA program, administered by the Arbor Day Foundation, designates municipalities following the review of their investment and maintenance to the urban tree canopy. The program requires spending of at least $2 per capita on urban forestry. Saratoga Springs budgets approximately $11 per capita to manage its urban forest.