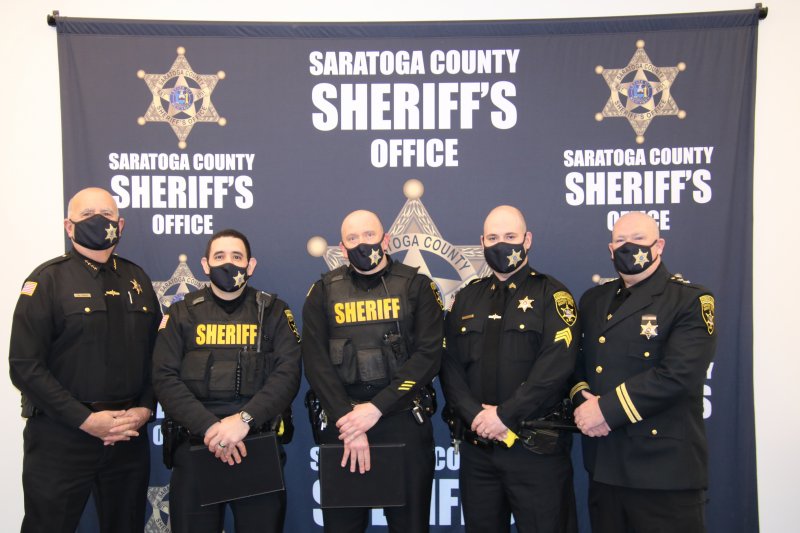 BALLSTON SPA — Deputies Eddie Hernandez and Jeffrey Kaplan were presented the Life Saving Award and Meritorious Service Award by Sheriff Michael Zurlo this week for their decisive action to save the lives of the two residents who were in immediate peril.

On Jan. 28, members of the Saratoga County Sheriff’s Office responded to an EMS assist call from a resident in the town of the town of Halfmoon.  It was reported that the two residents of a home on Oakleaf Drive had lost consciousness for unknown reasons.  When arriving, the deputies were met with a strong noxious odor from the residence and immediately located the two residents of the home who are both in their 60’s and who were having difficulty maintaining consciousness. The female resident was carried from the second floor of the residence outside by Deputy Jeffrey Kaplan and the male resident was dragged from the first floor to the outside by Deputy Eddie Hernandez.

Both subjects were treated at the scene by EMS personnel and transported to Samaritan Hospital.  It was later determined that both had suffered from carbon monoxide poisoning due to an issue in the residence.  Both are expected to make a full recovery.

“I have no doubt that the decisive action taken by these two deputies saved the lives of both of these residents,” Sheriff Zurlo said, in a statement. Both deputies will be formally recognized at an awards ceremony to take place later this year.

More in this category: « Tonko Selected for Major Climate-Focused Committees Leaving the Party: Dalton Becomes an Independent »
back to top