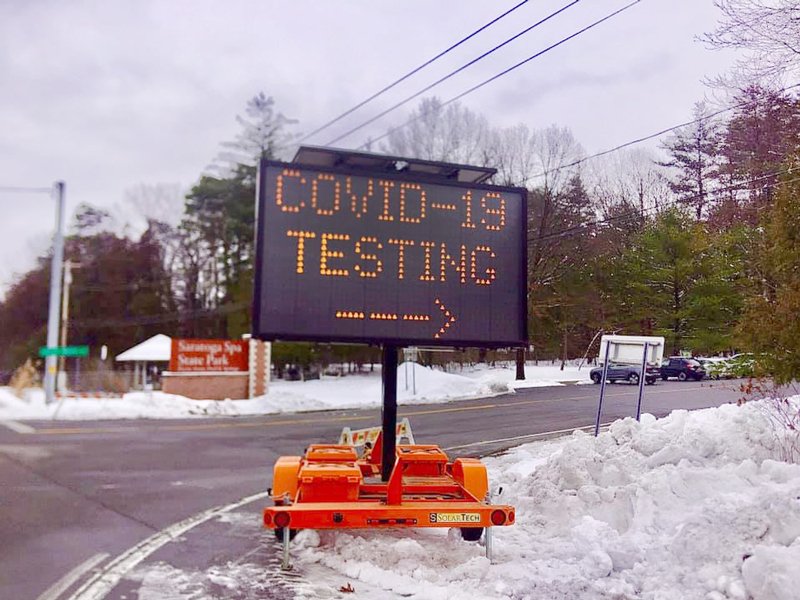 Signage on Route 50 just outside the Spa State Park on Tuesday Jan. 5, 2021 directs those being tested specifically for the new coronavirus variant to a site adjacent to the Peerless Pool where tests for the new strain got underway on Tuesday. Photo by Thomas Dimopoulos.

The new strain was detected by the Department of Health’s Wadsworth laboratory as part of the state’s UK strain testing program and was traced back to someone affiliated with Broadway’s N. Fox Jewelers.

“It’s a gentleman who is in his 60s. He was symptomatic, but he is on the mend and he’s doing better,” Cuomo said. The sample was originally done in Saratoga Hospital and then was one of the samples that Wadsworth received as part of their UK testing program. Three others at the jewelry store tested positive for COVID-19, but it was not immediately known whether that was also part of the UK strain.

The COVID variant first discovered in the U.K. is reported to be 70 percent more contagious than the normal COVID strain, although it is not believed, on its own, to be more lethal.

“It seems to be a little bit more easily spread and travel a little more quickly than the virus we know,” said Saratoga County EMS Coordinator Mike McEvoy. “It does not appear at this point to make people more sick or cause different types of illness and seemingly can be vaccinated against with the same vaccine. It concerns us in a sense that if there is a wide-spread outbreak of it, we would have more people ill in the community faster and our capacity to take care of those people in public health and in the hospitals could potentially be compromised with the speed that we’ve seen it spread in other locations,” McEvoy said.

“The key thing is the message we’ve been preaching since March or April: wear your mask, wash your hands as often as you can, and try to limit your social interaction with large groups of people. Stay with people who you know.”

The state Department of Health initiated what it called “aggressive contact tracing” related to people who may have visited the jeweler between Dec. 18 and Dec. 24, to learn if the specific viral strain has infected others. Starting on Tuesday, Jan. 5, the department set up a free testing area near Peerless Pool in the Spa State Park to specifically test people who were in contact or in the Spa City jewelry shop Dec. 18-24, for the UK COVID strain. Pre-registration was required.  Howard Zucker, Commissioner of Health for New York State said it takes about 44 hours to learn results regarding the B117 strain, as it is known.

N. Fox Jewelers released a brief statement to say it is working with the state health department on COVID-19 UK strain tracing and is voluntarily extending its store closure until further information can be provided by state and county health officials.The store reopened late in the week.

“Containment is vitally important,” Cuomo said. “This is a virus we have to be extra careful with. The numbers are frightening on the increase of the transmittal of (this strain of) the virus. Even if the lethality doesn’t go up the fact that it is so much more transmittable is a very real problem.”

More in this category: « U.S. Rep. Paul Tonko Unveils New Constituent Portal Ahead of 117th Congress Overcoming Homelessness in Saratoga: There is Hope »
back to top