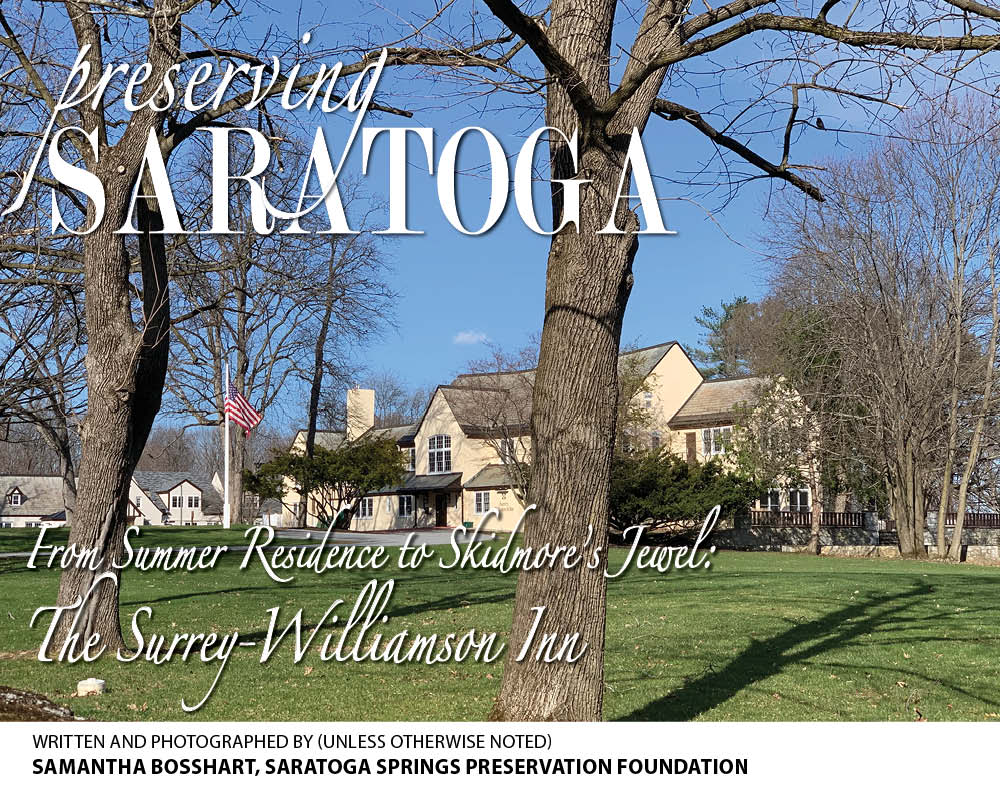 Spring always brings flowers and the anticipation and excitement of the Historic Homes Tour, the largest fundraising event of the Saratoga Springs Preservation Foundation.  On Saturday of Mother’s Day weekend, May 9, Skidmore College was graciously going to open its doors of the historic Surrey-Williamson Inn to those on the tour and host our Buildings & Breakfast and Lunch & Learn events.  Unfortunately, due to the Coronavirus, the event was postponed.  However, there is no reason to delay sharing the history of this stucco English style building until the tour can take place!

Skidmore College made the decision to move to its current campus on North Broadway in 1961 when Board of Trustees member Erik Jonsson and his wife Margaret donated the former Henry Hilton estate, Woodlawn.  Prior to that, the Skidmore College campus was comprised of nearly 90 buildings located along Union Avenue and adjacent streets.  The college was faced with the need to grow and the increased costs of maintaining and operating a variety of historic buildings that included former mansions and associated carriage houses, a sanitarium, small hotels, and a church.  The 650 acres of Woodlawn gave the college the opportunity to build a new, larger campus.  Construction started in October of 1963.  The first buildings, a residential and dining complex and the Lucy Scribner Library, were completed in 1966. Building of the new campus and the transition from the downtown campus continued for several years.

It was the year following the opening of its first buildings that Skidmore College acquired what is today known as the Surrey-Williamson Inn.  The building and associated annex were originally part of the estate of E. Clarence Jones.  Jones was a prominent New York City banker and stockbroker who was known for his philanthropy.  He acquired lands of the former Henry Hilton estate and built his summer estate immediately over the city limit of Saratoga Springs in the town of Greenfield between 1917 and 1919.  The compound overlooked Woodlawn and included the Broadview Lodge, Overlook Cottage, Hill Crest Cottage, Pine Tree Cottage, and a stone stable as well as a garage with a chauffeur’s apartment.

The Broadview Lodge, today the Surrey-Williamson Inn, was the main house of the compound that was built by prominent local contractor William J. Case and Son. On June 23, 1918 the New York Herald wrote:  “E. Clarence Jones has completed one of the most imposing villas on North Broadway. It is to be known as the Broadview Lodge and is on an eminence of a commanding and extensive view to the east. It is a copy of an old English villa and is very attractive.  The cottage is well back from Broadway and to the east the land gently rolls.  The gardens about the villa are very attractive.”

The Broadview Lodge with its slate roof had twenty-one rooms, twelve of which were full baths. The first floor had an entrance hall with a double staircase, a living room, dining room, and two reception rooms. The ground level of the house contained a kitchen, butler’s pantry, refrigerator room, servants’ dining room, flower room, and a butler’s bedroom and bath.

In January 1921, Jones, who had been divorced for twenty years, married Marjorie Seely Blossom, an actress and widow of author and playwright Henry Martyn Blossom. At the time, Marjorie was considered one of the most beautiful women of New York City.  Jones and his wife would typically spend from June through October at the estate and loved to entertain.

In 1926, Jones passed away.  His widow became the sole heir to Jones’ estate and retained ownership of the Broadview Lodge and the other buildings.  In 1928, she married Robert Amcotts Wilson, a retired British naval officer.  Over time the various buildings of the estate were subdivided.  In 1945, the Broadview Lodge was sold to former State Senator Thomas Brown and his wife Hattie. However, the Wilsons continued to summer at the Hill Crest Cottage until 1949.

In 1946, the husband of Senator Thomas Brown’s daughter Elinor, Roy Wright, opened the Brown School for Boys at the Broadview Lodge.  It was a boarding and day school that offered one to two years of intensive preparation for college with small classes and much individual attention.  Many of the students were World War II veterans in their early twenties who needed preparation to attend four-year colleges.  Students, upon graduating, were admitted to prestigious schools including Yale, Colgate, Middlebury, Syracuse, William and Mary, RPI and others.  The school was short-lived and closed in the fall of 1948.

The following year, the Brown School for Boys was converted into a 21 room hotel, the Surrey Inn.  A June 6, 1949 Saratogian article shared “extensive alterations in dining and room furnishings and decoration are being made. Twin-bed rooms and suites with private bath will be available. Accommodations for personal maids and chauffeurs will be maintained on the property. Dining service will be offered to non-guests by appointment only. While the hotel will be operated principally for guests wishing to spend a week or more in Saratoga, those staying for a shorter period will be accepted as vacancies permit.”

Later the hotel, an eight room annex with garage, and associated furnishings were offered for sale for $65,500.  On May 12, 1965, The Surrey Inn Corporation acquired the property and extensively renovated it.  Less than two years later on January 18, 1967, Skidmore College President Joseph Palamountain announced that the college had received the controlling interest of The Surrey Inn Corporation in a gift-purchase transaction with Robert Ducas of New York City, the sole stockholder.  “Skidmore is very grateful to Mr. Ducas. Not only for his generous gift, but also for his thoughtfulness in making available to the college an attractive property adjacent to the new campus,” said Palamountain, who intended to continue to operate it as a hotel.

The Surrey Inn – later renamed Surrey-Williamson Inn in honor of longtime trustee and benefactor Susan Kettering Williamson – became a popular location for members of the Skidmore community to gather for academic symposia, events, receptions, and meetings. With 10 newly renovated private guest rooms with private baths, onsite catering, beautiful gardens, and access to the college’s facilities, including its hiking trails, the space continues to be used for meetings, conferences, weddings, and other events.  “It is one of those special places that sets it apart from anywhere else on campus. It feels as if you are in another era when you step inside and you imagine the splendor and charm that guests over the past century have enjoyed,” shared Wendy LeBlanc, Director of Conferences and Events.  She is excited that this beautiful venue is now open to others outside the Skidmore community to experience.

While it is uncertain when the Historic Homes Tour will be rescheduled, please take this time to walk North Broadway to see the former E. Clarence Jones estate and enjoy the peacefulness of the North Woods and campus while appreciating its architecture, history, and landscape. To learn when the Historic Homes Tour; Porch Party that kicks-off the event; Breakfast & Buildings, a presentation about the history of Woodlawn, the main campus of Skidmore College, by Emeritus Skidmore professor Robert Jones; and Lunch & Learn event with Charlie Kuenzel and Dave Patterson presenting “Saratoga’s Big Bang: The Post Civil War Building Boom,” will take place, please periodically visit the Foundation’s website SaratogaPreservation.org.

More in this category: « Creeping Toward Reopening Phase 3: Indoor Dining, Nails, Spas, Tattoos, Tans & More 4 Miles; Every 4 Hours; for 48 Hours! 2 Local Athletes Run 50+ Miles for A Cause »
back to top