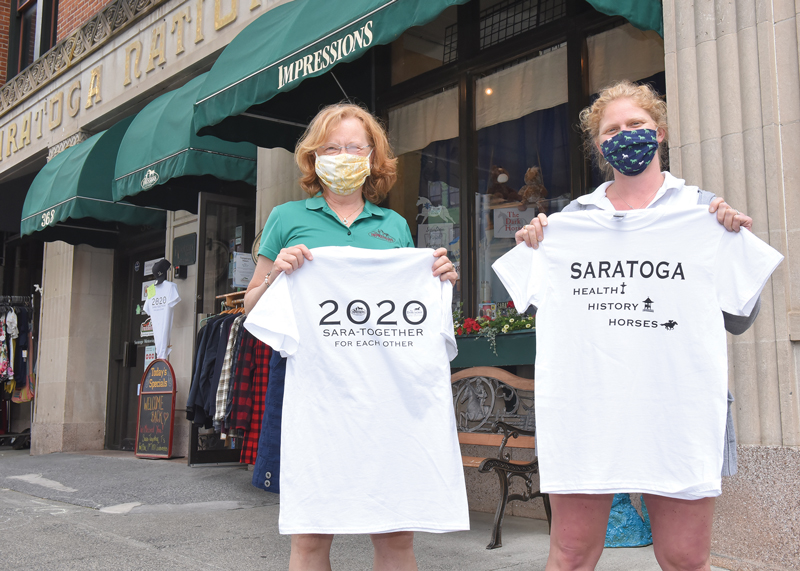 Cover Photo: Pam Worth and Alexandra Besso of Spoken Boutique are stronger together.
Gallery: 1. Marianne Barker and Maddy Zanetti, Impressions of Saratoga on Broadway.
2. Lifestyles of Saratoga owner Heidi Owen West and Margie Rotchford.
3. The Pink Paddock on Broadway.
All Photos by SuperSource Media.

SARATOGA SPRINGS — Small business owners opened their doors to in-store customers and hair stylists their salons for the first time in more than two months as part of the Capital Region’s phase two reopening plan on June 3. Outdoor dining returned one day later.

“We opened at 9 o’clock and we already had someone waiting at the door,” said Maddy Zanetti, at Impressions of Saratoga.  “We’ve been open the whole time for curbside, delivery and shipping but today is the first time of customers in the store.”  A table cradling bottles of hand sanitizer and disposable gloves and masks sat near the entryway door.

“People are thrilled to be out,” added Marianne Barker. “I do think people who are leery are going to stay home for a while yet, but people know we’re pretty careful, we’ve been open about what we’re doing and the steps we’re taking."

Kimberly Burton opened the doors to her Pink Paddock shop at 11 a.m. “It’s been three months. Three very long months,” she said with emphasis, celebrating the 15th year of the Broadway shop that’s been fitted with hand sanitizing stations, plastic protective shields at the register counter and posted to inform customers of in-store capacity regulations. “I think people are anxious to get out of the house, to shop, to try on some new clothes,” she said gesturing toward the dressing rooms, which are disinfected between customer uses.

“We’re already booked for the next three weeks,” said Yvette Ruddy, a hairstylist at Remarkable Finish on Broadway, where a digital thermometer rests at the entryway and customer chairs have been placed at a safe distance from one another. The employees have all been tested for the COVID-19 virus before ensuring they could return to work, she said.

An array of state guidelines and restrictions accompany reopening plans for both workforce employees and customers, with presence being limited to no more than 50% of the maximum occupancy for a particular area, as set by the certificate of occupancy. Employers are also recommended to adjust workplace hours to limit in-person presence to necessary staff only, as well as maintaining six feet of separation from others and wearing an acceptable face covering.

"What we have done with this COVID virus is really an amazing accomplishment, and it was all done by the people of this state. They did it, 19 million people did what they never did before. They responded with a level of determination and discipline that I was amazed with frankly," Gov. Andrew Cuomo said this week. "Remember where we were: we had 800 people die in one day. We had the worst situation in the United States of America. At one point we had the worst situation on the globe. And now we're reopening in less than 50 days. We went from an internationally terrible situation to where we’re talking about reopening."

To date, more than 105,000 U.S. residents have died during the past three months due to COVID-19. More than 38 million Americans have filed unemployment claims over the span of nine weeks. Whether the worst has passed or a so-called “second wave” returns - as some in the medical community have suggested – remains an unknown.

“I’m delighted to see our retailers open again. And as we are getting caught up in our reopening details and stores are focusing on their safety plans - and we have riots going on and protests going on, It’s easy to lose track that there still is a virus present in our community,” cautioned Saratoga Springs Public Safety Commissioner Robin Dalton.

In Saratoga County, there have been 495 confirmed cases of COVID-19 this year, 56 specifically being Saratoga Springs residents. Sixteen people have died, and 6 people are currently hospitalized.  Approximately 2,500 residents have been isolated or quarantined at some point.

Gov. Cuomo’s NY Pause order went into effect March 22, and the city of Saratoga Springs and the greater Capital District Region were cleared by the state to begin the phase 1 re-opening of the local economy beginning Wednesday, May 20.

There are four reopening phases in all, and an up-to 14-day incubation period between phases to ensure that infection rates and hospitalizations are maintained at a manageable level. Phase Three – which includes indoor dining at restaurants, is currently slated for its reopening phase June 17; Phase Four, which focuses on Arts/ Entertainment / Recreation, and Education, including libraries, will potentially hit its reopening mark July 1.

On May 28, Cuomo signed an Executive Order authorizing businesses the ability to deny entry to those who do not wear masks or face-coverings. "The store owner has a right to protect themselves (and) the other patrons in that store," he said.  A subsequent announcement states summer day camps statewide can open on June 29. A decision on sleep-away camps will be made in the coming weeks.

Malls - specifically any indoor common portions of retail shopping malls with 100,000 or more square feet of retail space available for lease, remain closed. However, stores located within shopping malls, which have their own external entrances open to the public, separate from the general mall entrance may open.

More in this category: « This is the Season for Beauty Blossoms & Hope Planning Review This Week for Proposed New 120-Room Hotel on South Broadway »
back to top