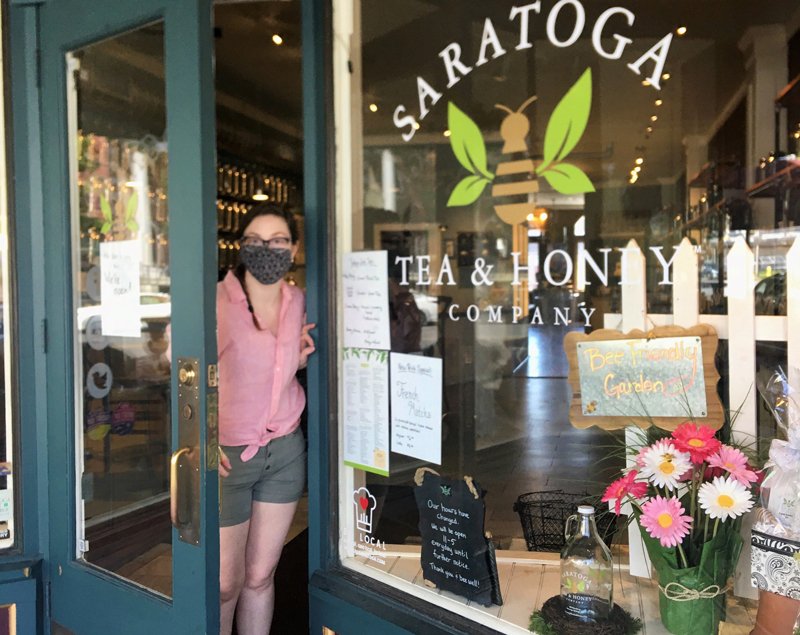 Emma Lance, poking her masked face through the front entry door of the Saratoga Tea & Honey Shop on May 20, 2020. Photo by Thomas Dimopoulos.

SARATOGA SPRINGS — Wednesday’s dawn brought to Saratoga a morning unlike any of the 58 days that had come before it.

After hitting on all of the region’s required benchmarks that both document the downward trajectory of infections past, and prepare for potential viral spikes of the future, Saratoga and the seven other counties that surround it were cleared by the state to begin phase 1 of re-opening the local economy on May 20.

“I feel like we’ve been in a bubble,” said Emma Lance, poking her masked face through the door of the Saratoga Tea & Honey Shop on Broadway, where the day’s online orders and curbside pickups were being prepared.  “You can’t see my mouth behind this mask,” she added, “but I’m smiling.”

Commercial photographer Tom Stock escaped his daily honey-do list posted inside his home by planting a metal folding chair in front of Uncommon Grounds coffee shop on Broadway, where he took in all the wonders the blue-sky Wednesday offered, while thinking about future reopening phases that will allow more shops to open and people to more readily mingle.

Wednesday’s Phase One reopening allowed for the first wave of industries to re-start - construction, agriculture, forestry, fishing and hunting, manufacturing and wholesale trade, among them. Retail is limited to curbside or in-store pickup or drop off.  For all businesses reopening, physical distancing measures, face covering protections and maximum indoor capacity adjustments must be implemented and maintained.

Public Safety Commissioner Robin Dalton, city police Chief Shane Crooks and Fire Department Chief Aaron Dyer – all members of Saratoga Springs’ COVID-19 Reopen Task Force – visited businesses door-to-door Wednesday morning, talking to store owners and employees, and handing out safety plans outlining how businesses’ workplaces can prevent the spread of COVID-19. New York State requires each re-opening business to develop a written safety plan. Businesses may develop their own safety plan or use a template provided by the state. (Details about obtaining those forms are below).

Statewide to-date, just over 350,000 people have tested positive for the coronavirus. Overall, more than 28,000 have died due to COVID-19 in New York, more than 92,000 in the U.S., and more than 325,000 across the globe, according to the Center for Systems Science and Engineering (CSSE) at Johns Hopkins University.

Current daily figures point to an average of just over 100 deaths per day in New York due to the virus, matching just about where those figures were on March 26. In April, the death tally spiked to greater than 700 per day for several days.

“We’re basically back to where we started before this tragedy descended upon us,” Gov. Cuomo said, this week.

“What will happen with reopening?” Cuomo remarked May 20, on the day the Capital Region reopened for phase one. “Whatever we make happen. There is no predestined course. What will happen is a consequence of our choices and a consequence of our actions,” he said. “If people are smart and responsible and if employers and employees are responsible, then you will see the infection rate stay low. If people get arrogant, if people get cocky, if people get casual or people become undisciplined – you will see that infection rate go up. It is that simple. It has always been about what we do.”

The governor also announced on Wednesday that religious gatherings of no more than 10 people will be allowed as long as statewide social distancing measures are enforced and participants wear masks. Earlier in the week, Cuomo announced racecourses – such as Saratoga Race Course and the Saratoga Casino’s harness track - may open June 1 without fans. NYRA subsequently announced the Belmont meet will get underway June 3 and will concludes July 12. The Saratoga meet is slated to open four days later.

“Do your part: wear a mask. It is amazing how effective that mask actually is,” Cuomo said Wednesday, pointing to statistics that show frontline workers - downstate hospital employees, transit workers, NYPD and FDNY/EMT workers – each having lower infection rates than the general population. “How can they all have a lower infection rate? They’re wearing the mask,” Cuomo said. “The mask works. It’s in the data.”

Meeting the metrics and maintaining control over the virus spread is key to remaining “open,” as well as in moving forward through the series of successive phases that will see the reopening of an ever-increasing number of additional businesses. That holds true for the entire “Capital Region” designation. The Capital Region sector is comprised of eight counties: Albany, Columbia, Greene, Saratoga, Schenectady, Rensselaer, Warren, Washington.

There are four reopening phases in all, and 14 days - or less, should metrics not increase, as deemed by regional leaders –  are in between the phases. Those phases and dates are:

For businesses: Business plans do not need to be submitted to a state or local agency for approval, but must be retained on the premises of the business and must be made available to the New York State Department of Health (DOH) or local health or safety authorities in the event of an inspection.

Login to post comments
More in this category: « Shows On! Area Drive-Ins Open for Season All Eyes On Belmont »
back to top