All Journeys Have Destinations of Which the Traveler is Unaware 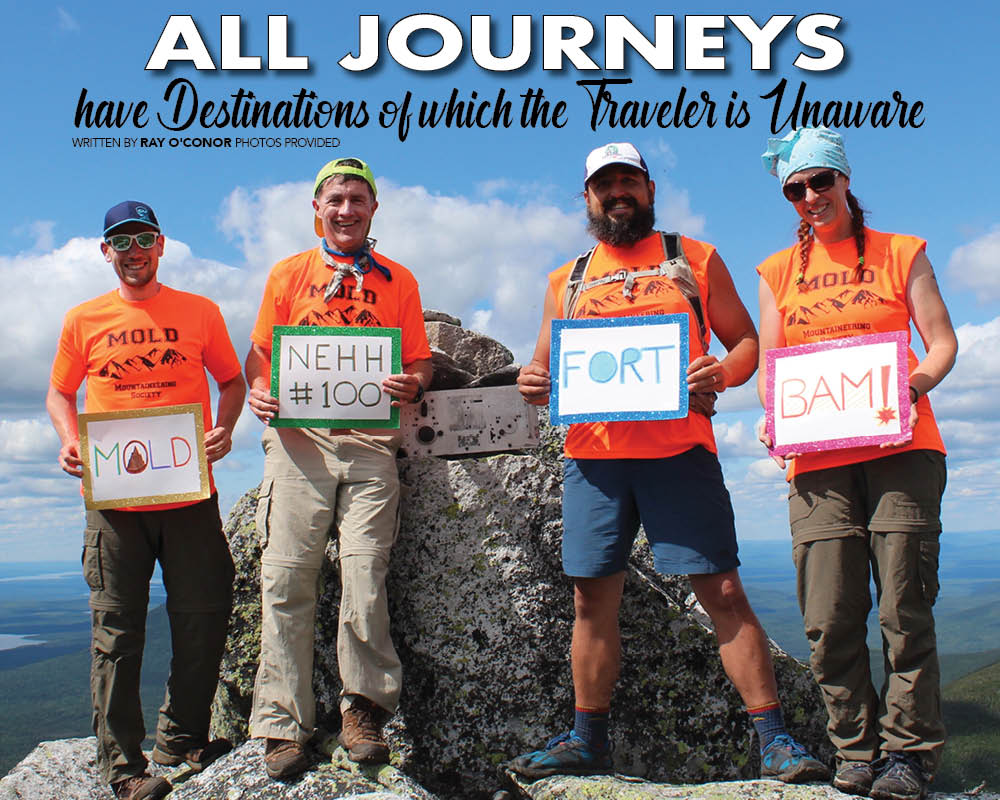 "Everybody needs beauty as well as bread, places to play in and pray in, where nature may heal and give strength to body and soul."  -John Muir

It is destiny for some people to come into your life to rekindle your spirit, motivate and inspire you. A decade ago, three strangers who discovered an interest in hiking and mountain climbing, found themselves among a group of Adirondack Mountain Club (ADK) members at a trailhead at 6:30 a.m., preparing to hike the Santanoni Range. Alison Darbee, Joe Murphy and I would spend the next twelve hours ascending and descending Panther, Couchsachraga and Santanoni Mountains. It is among the most challenging of day trips in the Adirondack High Peaks.

Joe and I had met once before on a hike, but we were all virtual strangers with little in common.  Joe, a Residence Life Community Coordinator at Skidmore College, was twenty-five. Alison, an art teacher, ten years older than Joe, and me, a banker, twenty years Alison’s senior.
On this morning of June 6, 2009, we never imagined our lives would become inextricably linked. Nor did we foresee that two years later another twenty-something young man, Jon Laurin, a teacher with whom Joe was acquainted in college, would by chance (or fate) come into our lives on a forest trail and complete what would become the MOLD (Murphy, O’Conor, Laurin, Darbee) Mountaineering Society.

It’s hard to say what has kept us connected for more than a decade. Perhaps it’s a common goal or interest. It could simply be a mutual love of ascending to new heights and being in wilderness. None of us can say for sure, except perhaps in Alison and Jon’s case.

Jon and Alison first met on an ADK group hike to Seymour Mountain. It is a long, challenging day, chugging up steep herd paths through thick forest to the summit.

There is a commonality of purpose in such a task, but there was something more between Jon and Alison. Neither would have predicted that a chance meeting in the wilderness that day would lead to love and marriage. Nor would they have guessed that the officiant at their wedding would be a new hiking buddy, Joe Murphy.

Although the four of us share common values and interests, on occasion the thirty year gap in our ages is evident. While traversing the Willey Range in New Hampshire’s White Mountains, a storm approached as we started the ascent of the final peak in the range, Mount Tom. Hearing thunder in the distance, we debated whether we could reach the summit and retreat to safety before the storm.  “Is it over?” Joe lamented. I instantly responded, “Over? Was it over when the Germans bombed Pearl Harbor?”

Joe shot me a brief glance, then charged ahead leading us through the mud, roots and rocks up to the summit. We spent only a moment at the peak for a photo before descending quickly as thunder roared, rain poured and lightning illuminated the sky. Once we reached safety, Joe asked, “Ray, you do know the Germans didn’t bomb Pearl Harbor, right?” With an incredulous stare I countered, “Joe, are you serious? You’ve never seen Animal House?”

It isn’t always fun and romance on MOLD outings. As a foursome, trio or in pairs, we have ascended more than 200 peaks. There was a confrontation with a bull moose; we lost our way a time or two; we’ve fallen into spruce traps and suffered an assortment of cuts, scrapes, bruises, sprains and other injuries. When assessing risk, we try not to cross the fine line between bold and stupid, but sometimes the line moves on you.

On an attempted winter traverse of part of The Great Range, blizzard conditions struck as Joe and I crossed the summit of Gothics. Visibility was reduced to a few feet as gale force winds slowed us to a crawl. Sub-zero wind chills and an unrelenting snowfall jeopardized our safe return.  Joe shouted over the deafening howl of the wind, “Are we going to die today?” We may lose a few toes or fingers I thought. But, I assured Joe, and perhaps myself, “No one’s dying today.” We struggled to find a bailout trail and although equipped to spend the night, were grateful that with the aid of map and compass, we battled our way down the mountain.

Alison and Jon’s most challenging ascent was far from the Adirondacks. In 2012, we traveled to Tanzania to climb Mount Kilimanjaro. At 19,341 feet, it is the highest peak on the African Continent. Our guide was Protus Mayunga, a native of Tanzania and the founder of Roof of Africa Adventures. The ascent was uneventful until midnight of the fifth day when we began to climb the last 4,000 feet to Uhuru Peak, the summit of the world’s tallest free standing mountain. The air is so thin that you gasp for air, can experience dizziness and nausea and be overcome with fatigue.

With the summit still 2,000 feet above and miles away, Alison stopped. “I don’t think I can go any farther,” she uttered while resting against a trailside boulder. She suggested to Jon that he go on without her, but he would have none of it. “We came here to do this together. So, whether we go up, or we go down, we go together.” It was at times like these that Protus would invoke a simple Swahili expression, Imara kama simba (Be strong like a lion). By her personal fortitude and strength, along with Jon’s encouragement, Alison fought through the pain and exhaustion. Hours later, exhaustion turned to exhilaration as they stood together and watched the sun rise over the Serengeti from the Roof of Africa.

After summiting all of New York’s high peaks, we set out to conquer all of the high peaks in the Northeastern United States and the New England Hundred Highest. Thousands of road miles would be logged along highways and country lanes. We ventured down rough and often impassable dirt roads, occasionally thwarted by washed out bridges throughout Vermont, New Hampshire and Maine. Our adventures took us across hundreds of miles of trail and tens of thousands of feet of elevation gain and loss. This past summer, a decade since we first met, we set out to ascend Mount Coe, South Brother and Fort Mountains to fulfill our mission.

We traveled to the far reaches of Maine and set up camp the night before. The cool, crisp night air and the soothing sound of a nearby stream created the ideal environment for a good night’s rest. An early rise had us on the trail shortly after dawn. We knew it would be a long day, having to cross three mountains (Coe, South Brother and North Brother), before beginning a bushwhack to our 100th peak. The sky was brilliantly blue with a scant number of clouds floating by like feathers, ushered by a gentle breeze.

The steep ascent up Mount Coe challenged us, as sections of the rock slide route were treacherously slick. As we approached Coe’s summit, we marveled at the superb views of Mount Katahdin, Maine’s highest peak. The wooded saunter from Coe’s summit to South Brother’s was gradual, along well maintained trails. What followed was a very steep ascent to the apex of North Brother, the launch point to Fort Mountain.

Fort is one of several New England Hundred Highest trail-less mountains. Jon led us, thrashing through a thick maze of trees, brush and blowdown. Bare arms and legs were nicked, scraped and cut as we rumbled and stumbled along. While some call this rarely trodden upon course a herd path, Jon coined the phrase herdwhack to describe it. I would argue hurt path is a more accurate characterization.

There was some hesitancy during the final approach to the summit. It marked an end to another epic journey for the four of us. However, as we broke through the tree line and crossed Fort’s rocky ridge to its peak, hesitancy was replaced by awe. Standing atop Fort, hundreds of miles of natural beauty surrounded us. Neighboring peaks pierced the sky. Deep blue pristine lakes, with surfaces as smooth as glass, lay below. There is always a bit of magic in the mountains and a sense of feeling so small in such a vast wilderness. Naturalist John Muir said it best, “Everybody needs beauty as well as bread, places to play in and pray in, where nature may heal and give strength to body and soul.”

Seldom is any worthwhile goal achieved alone and it is most gratifying when accomplished as part of a team. There is an old adage that goes, Get lost in nature and you will find yourself. How fortunate are we four adventurers that we not only found ourselves in the wilderness, but also discovered friends in whose hands we entrust our lives.