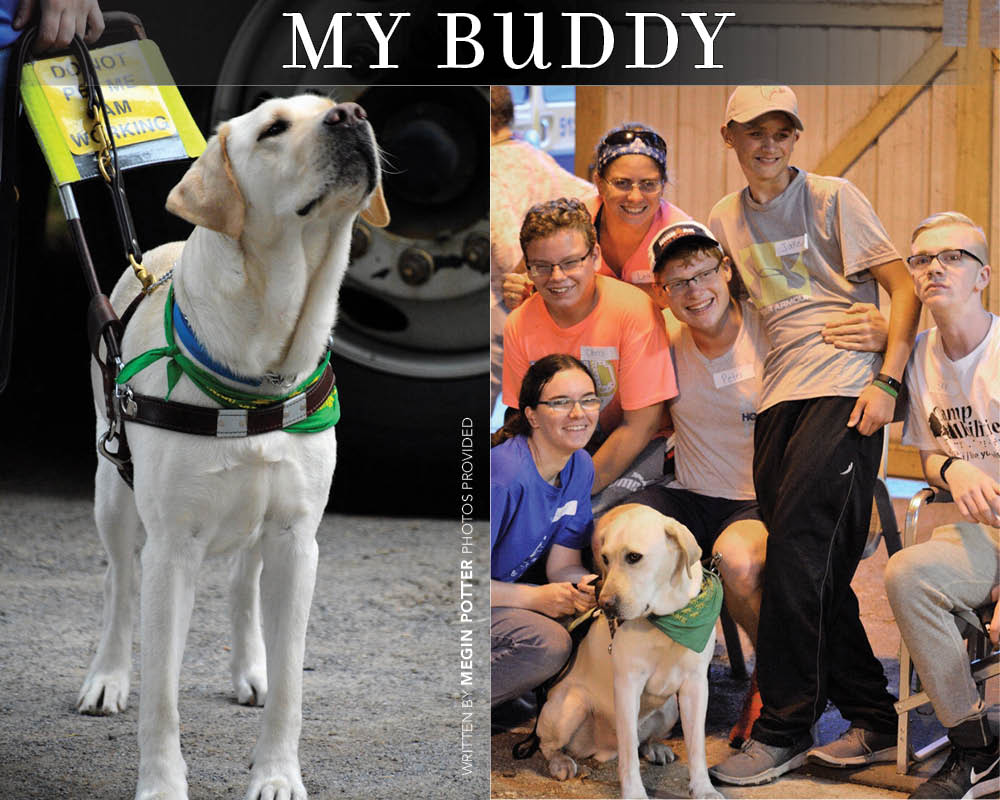 When they are by our side, friends give us the confidence to freely follow our own path.

Two years ago, Megan Hale met a friend like this.

“Her dog is by her side for everything. Hero is awesome! He helps her get around safely. He runs with her. He watches out for her and makes sure she’s okay,” said Tiffany Mitrakos, Director of Camp Abilities Saratoga.

As one of 26 blind and visually impaired campers between the ages of 10 and 16+ in the program, Hale had the opportunity to participate in sports including track, baseball and bicycling, on the grounds of the Skidmore College campus.

“After camp, I tried out for and got into, the varsity team at school starting in 8th grade. I was able to join and tell them how to adapt things so I could do them, too,” said Hale.

This summer, Hale was a counselor-in-training at Camp Abilities and is currently a Freshman at Hudson Valley Community College pursuing a physical education degree.

“I have realized, over the years and going to camp especially, that not many students with a disability – any disability – are being included in sports. There are not many teachers out there who know how,” she said.

Hale’s sense of sight has been substantially affected by Leber congenital amaurosis, a condition that she describes as, “similar to going to see a 3-D movie without 3-D glasses on, and with no peripheral vision”.

She had primarily been using a cane to get around until high school, when she was old enough to be matched with a guide dog.

“I was nervous. Growing up, we didn’t have a dog and we’d never had dogs in the house before. This is my first time being around a dog, but I knew the benefits, and that pushed me forward,” said Hale.

Guiding Eyes for the Blind trained Hale how to work with and care for her guide dog, a yellow Labrador named Hero.

“He’s like a car and they teach us how to drive the car. I call him my “Lab-orghini,” she said.

Hero has given Hale an inspiring new independence.

“She is the only camper that has ever come to Saratoga with a guide dog. It was really cool for the other campers to see that might be an option in the future for them, too,” said Mitrakos.

Together at Camp Abilities Saratoga, Hale and Hero not only participated in sports, but also experienced leading others.

“He will basically be at my side the whole time. They call us; Coach Megan and Coach Hero. On the very rare occasion that I’d need to guide athletes, he’d guide both of us,” said Hale.

As heros are apt to do.

“More people will get excited about physical activity if people like them were a part of leading it. I just think that everyone should have equal access to it and it should be open, with opportunities for everyone to participate.”

To find out more about Camp Abilities Saratoga, go to CampAbilitiesSaratoga.org.

More in this category: « Saratoga Hometown Hero : Jack Wilpers and a Journalist Who Helped Tell His Story Stefanik Cosponsors Forest Recovery Act »
back to top