Saratoga Hometown Hero : Jack Wilpers and a Journalist Who Helped Tell His Story 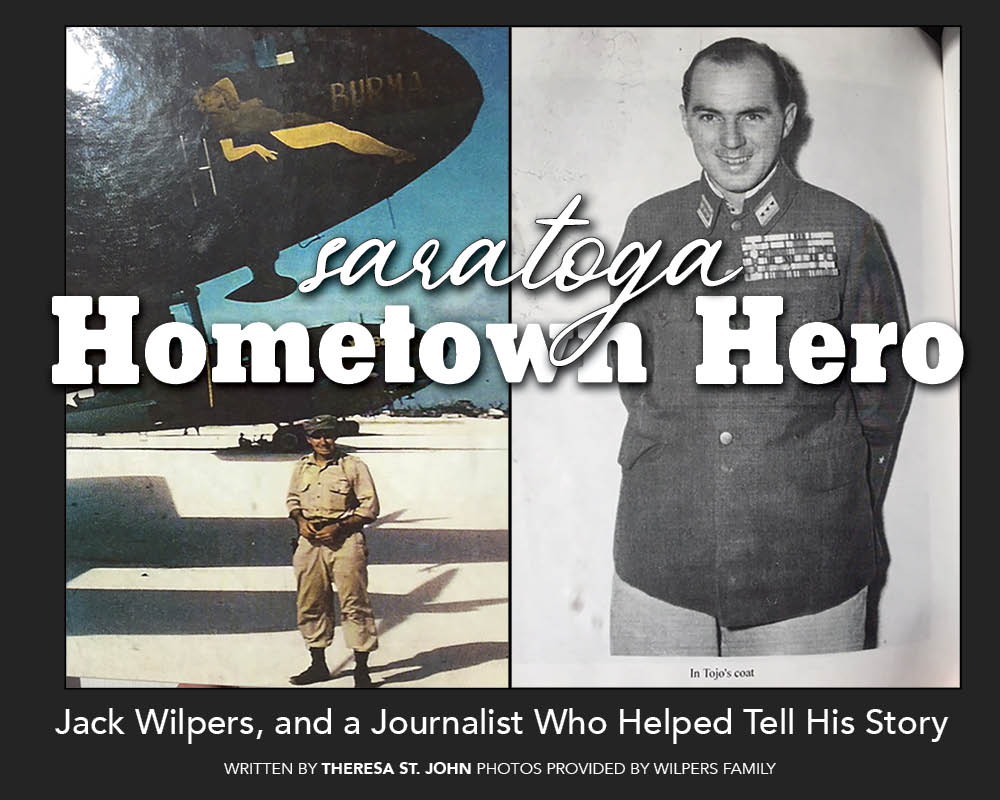 I’ve always been interested in history – especially WWII coverage and the brave men and women who fought for freedom. I’m a German-Jew, with vivid memories of sitting with my mother in front of the TV as a child, here in America. I can still hear her voice pleading that we never forget the atrocities of Hitler’s Germany – lest they happen again.

Many of the stories I write today involve WWII veterans willing to speak with me about that time, what they lived through during those years. I’ve met Holocaust survivors and their families, attended ceremonies and celebrations, listened to stories of good people who hid them during the war that encompassed so many different countries throughout the world.

Chris Carola worked 34 years for The Associated Press, the last 31 as a reporter with the AP’s Albany bureau. His byline appeared in newspapers and on media websites around the world, including The Washington Post, MSN, ABC News, Fox News, The Independent, USA Today, New York Post, Yahoo Singapore, Yahoo India, to name a few.

When he heard about John J. Wilpers Jr. – Jack to his friends and family – Chris knew he wanted to meet and speak with him. “He was born in Albany in 1919 but grew up in Saratoga Springs. His father loved horses and worked as a bookie. Wilpers enlisted in the Army Air Corps during 1942 and then transferred to a counterintelligence unit,” the man sitting in front of me says. I watch as he looks away for a moment, deep in thought.

Wilpers was one of five men, part of the U.S. Army Intelligence unit ordered to track down and arrest former Japanese Prime Minister Hideki Tojo after WWII ended.

It was September 11th, 1945, only nine short days after Japan surrendered. In Tokyo, the soldiers stood outside Tojo’s home, ready to take him into custody. Before that could happen, there was a shot – the Japanese warlord who had approved the attack on Pearl Harbor had tried to take his own life by shooting himself in the chest.

Wilpers kicked in a door and found Tojo collapsed on a small couch, his white shirt soaked in crimson blood, a pistol still clutched in his hand. Wilpers ordered a Japanese doctor – at gunpoint – to help keep the war criminal alive until an American doctor arrived to take over.

Nicknamed ‘Razor,’ Tojo was a high-ranking army officer, born into a military family. He’d been minister of war from 1940 to 1941, then Prime Minister until 1944. He was ruthless, blamed for the murder of millions of civilians in China, the Far East and the Pacific, as well as thousands of Allied POWs.

Tojo survived his botched attempt at suicide. In the end, he was convicted on several counts, sentenced to death by hanging inside the Sugamo Prison just a few days before his 64th birthday, December 1948.

“I was fascinated with the story, from the moment I saw a photograph of Wilpers standing over Tojo’s blood-spattered body,” Chris tells me drinking from a bottle of Orange Juice while I nurse a cup of coffee. “Finding out that this young man was from Upstate, Saratoga no less, blew me away.”

Chris’s quest to talk to the WWII veteran began in the early 1990s. “I called, left messages, wrote letters in an attempt to reach Mr. Wilpers,” Carola shakes his head at me. “He didn’t want to talk, like so many others who made it through the war, coming home to marry, raise families, start a new life. They just wanted it to be over.”

Once returning to the states, Jack married, raised a family of five while living in a Washington D.C. suburb, and had a successful 33-year career with the Central Intelligence Agency. It would be decades later before he was willing to speak about his wartime experiences.

Most of the veterans I speak with are humble and shy away from talking about their years of service. I can’t even imagine the things they saw and lived through during times of war. Many say that they were doing their duty, what any good soldier would do. It takes some coaxing to accept any credit for their heroism.

In 2010 Pentagon officials held a ceremony to award Mr. Wilpers the Bronze Star he’d earned for his part in Tojo’s arrest. Only a few media outlets covered the ceremony and they didn’t get the details Chris would gather later that same year. None mentioned that Jack was a native New Yorker who had grown up in Saratoga, either.

According to the award’s citation, however: “Had Captain Wilpers not acted with courage and initiative, Hideki Tojo would have succeeded in avoiding trial and possible execution for his acts.”

The interview excited Chris Carola. “He was speaking to the press now,” he says while taking another sip of OJ. “I wondered if it was because of his age? Maybe the war was far enough behind him? It made me want to try to reach out again, try to get him to speak with me.”

That Summer, Chris was on vacation in Westport, MA with his brother Barry and his kids. They were staying at a waterfront rental house on Horseneck Beach. Plans for their return home changed a bit when news of a storm brewing hit. Chris decided to check out the other end of the beach before they left to head back to New York.

He was wearing a khaki 2004 Saratoga Race Course giveaway baseball hat – the free ones they give out at the track during the meet. He watched an older guy make his way up the beach from the surf. The man collected his belongings and Chris laughed when he noticed the hat he was holding was the same one!

“Hey, you,” Chris called out. “Nice hat!” How ironic. The surfer told Chris his family had lived in Saratoga at one time, that they’d owned a couple of different businesses back in the day. Curious, Chris asked what the family name was. Believe it or not, the man replied ‘Wilpers.’

“Tell your old man I’m still pissed off at him for not talking to me about Tojo,” Chris half-kiddingly said.

Once the man introduced himself as John Wilpers, Chris realized they’d actually spoken on the phone in the early ‘90s. John had been the one to explain to the young reporter that his father was never willing to talk about the war – not even with family.

They shook hands goodbye. John promised to tell his father about the random meeting on the beach, that Chris was going to call in a few days, that his dad needed to talk about the war with this man who’d been trying to get in touch for so many years.

Chris did get to speak with Wilpers after all. They talked on the phone two different times, on consecutive days, for about 90 minutes, but it was enough. I imagine the conversation was warm and open. I’d like to believe that both men spoke about heavy things – the capture and arrest of Tojo, the end of the war, heroism, for sure. Perhaps they also shared stories of family and loved ones, personal aspirations, and dreams of peace.

“It was a job we were told to do and we did it,” he told Chris. “I just happened to be the one who busted open the door.” The words of a true, humble American hero.

Since April 2017, Chris has been giving one-hour presentations on Jack Wilpers – using family photos, Jack’s own wartime letters and WWII newspaper clippings to tell how a Saratogian helped capture one of WWII’s most hated figures.

Among the places he has given the talk: The New York State Military Museum here in Saratoga, The Irish American Museum in Albany, Saratoga Central Catholic School, (formerly St. Peter’s, Jack’s alma mater,) and Fort Ticonderoga. He’s scheduled to give his talk at 7 p.m. Thursday,  April 23rd, at the Saratoga Springs History Museum in Canfield Museum in Congress Park.

More in this category: « The Last Picture Show My Buddie »
back to top