Hanging out at the Mall with Farmers 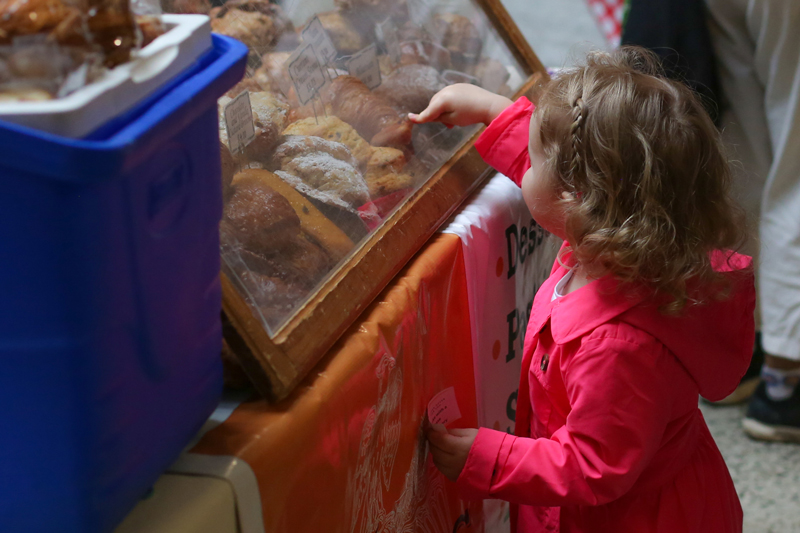 Perhaps you (or your children) remember when life was all about the mall. Shopping, eating, watching movies, meeting up with friends.

The mall was where it was at from the 1970s through the late 1990s. Malls were a key focal point of public life. Like downtowns across the United States, malls brought people together by offering us the things we love: food, entertainment, things to buy. They gave us space to walk, to sit, to read, to browse, to eat, and to shop.

Online shopping and Internet marketing changed our buying habits in the early years of the 21st century. Malls and their traditional retail anchors struggled as a result. The loss of two retail anchors – Sears and the Bon Ton – along with the closing of such popular stores as Forever 21 and Charlotte Russe at the Wilton Mall are signs of that struggle.

Farmers markets meanwhile have proliferated, as Americans have begun to seek healthy foods grown, raised, and made locally. The crowds that throng High Rock Park on Saturdays in the summers for Saratoga’s oldest and most established farmers’ market are evidence of that.

Now, the market and the mall are joining forces. During this holiday season and into the winter, the Wilton Mall will host the Saratoga Farmers’ Market for its indoor season. The market moves indoors on Saturday, November 2, and will operate at the mall from 9:30 a.m. to 1:30 p.m. each Saturday through April.

The partnership marks a transformation for both the market and the mall.

The Saratoga Farmers’ Market was established in 1978, as a summer outdoor market. It evolved into a year-round market in the late 1990s, and currently offers produce, meats, eggs, artisanal cheeses, milk, and a wide array of prepared foods and crafts throughout the winter.

But the market, like the mall, has had its share of struggles, particularly in establishing a home for its winter season. As Sandy Arnold of the market’s Pleasant Valley Farm recounts, the market began its winter season first at the Waldorf School, then the Salvation Army building in downtown Saratoga. It quickly outgrew the space at the Salvation Army and moved to the Division Street Elementary School in 2009. School rules prevented the market from staying at that locale, so it moved in the winter of 2013 to the Lincoln Baths Building at the Saratoga Spa State Park where it operated until last spring. Each of these locales presented challenges in terms of vendor space, accessibility, and parking.

The mall changes that.

“A bus travels twice an hour from downtown Saratoga, Skidmore, and points in between to the market entrance,” says Emily Meagher, market manager. “Entrances and restrooms all are handicapped accessible, and there’s free WI-FI provided by the mall, as well.”

Mike Schaffer, manager of the Wilton Mall, noted that while malls and markets often appear quite different from one another, they also can be quite complementary. “The market board approached us because they needed space,” he said. “We have available space and are thrilled to have them here for the season.”

To visit the Saratoga Farmers’ Market during the holiday season, drive up Route 50 to the mall, or take the bus. Pull in or disembark near the main entrance. From 9:30 a.m. to 1:30 p.m., you will find Christmas trees, wreaths, and kissing balls from Charles Holub of Scotch Ridge Farm arranged artfully on the lawn outside. Nearby will be Trish Nusbaum’s Food Florist truck and wood-fired pizza from a new vendor. Enter the doors and a bounty of fresh seasonal vegetables, eggs, meats, milk, prepared foods, and other locally grown, raised and made items await.

The market stretches between the DMV to the reflecting pool near Bath & Body Works, with vendor stalls weaving in and out of such mall retailers as the Shoe Depot, American Eagle Outfitters, Kay Jewelers, and Balsam & Birch Adirondack Accessories. Hot dishes will be available for onsite eating or take-out from Euro Delicacies, Daily Fresh, Petra Pocket Pies, Giovanni Fresco, and many others.

Skylights bring natural light to the vendor tables. In between are chairs and tables, free Wi-Fi, and an opportunity to also shop at Healthy Living Market, which already offers products from many Saratoga farmers. Both the mall and the market are looking forward to creating joint activities with the market through the winter.

“It will be a different experience for the market and for our loyal base of customers,” says market board president Beth Trattel. “But it’s giving us the opportunity to work with the mall to repurpose community space and create something new.”

More in this category: « Code Blue: A Community Comes Together Saratoga Hospital Expands Urgent Care in Queensbury »
back to top