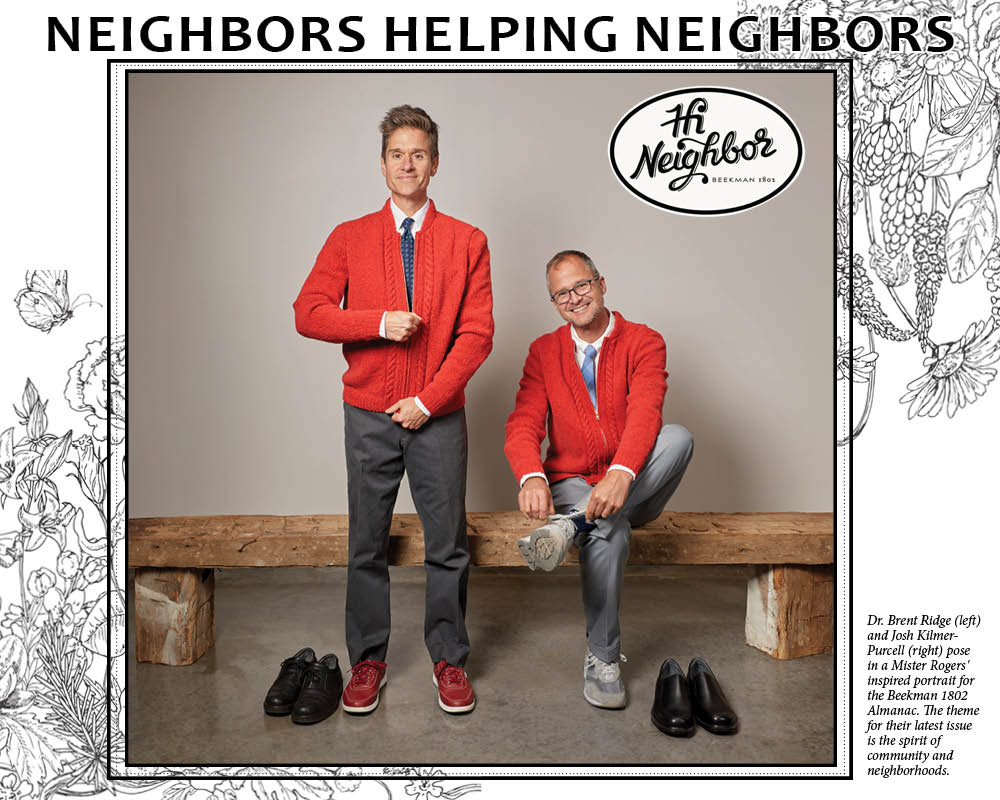 We’ll never ever go wrong as long as we treat every single person like they’re our next-door neighbor,” believes Josh Kilmer-Purcell, cofounder of Beekman 1802.

For those unfamiliar with the brand and its skyrocketing success, Dr. Brent Ridge and his partner Josh Kilmer-Purcell began selling goat milk soaps and goat milk cheeses from their Beekman Farm in Sharon Springs in 2008. After competing in and winning CBS’s “The Amazing Race” in 2012, their popularity exploded, as well as the products they curated and created. From my perspective their living brand is on the scale of Chip and Joanna Gaines or Stonewall Kitchen.

The premise behind Beekman 1802 is literally neighbors helping neighbors. In Brent and Josh’s humble beginnings, Anthropologie placed a large order for their 9 oz goat milk soap bars. The boys were fearful they would never be able to put the order together in time, so they put out a call to friends and neighbors for help. They expected 4 or 5 people to show up -instead over 100 neighbors worked long hours bagging the soaps to meet the shipping deadline. “Neighbors helping neighbors is not just a company saying; it's a mindset and a living brand,” exclaims Alan Edstrom, Events Manager.

Josh and Brent could have chosen to relocate their corporate headquarters to Boston or NYC, but in keeping with their homey dynamic, they chose the new waterfront office space called Mohawk Harbor, on the banks of the Mohawk River, a mere 17 miles from Saratoga Springs.

And as our neighbor, their influence is apparent - employing local residents, supplying local vendors with unique merchandise and recently helping their friend Pat Freisen fundraise for her campaign for County Supervisor.

Josh and Brent are frequently present at the casually chic corporate headquarters. Both were mindful of hiring a staff who represented the brand and they were careful to choose people they wanted to share their company journey with. Saratoga native Anna Finlay began in June as their Social Media Associate. “I’ve never had a job that lets me have the creative freedom I have here. This is my dream job and I found it in my backyard!” smiled Anna. CEO Tomei Thomas and Alyssa Straub, HR Manager, both live in Saratoga Springs as well.

“When someone else succeeds, we succeed,” Alan noted. For local stores stocking the brand, this is true. Heidi Owen West, owner of Lifestyles of Saratoga says, “Carrying the Beekman 1802 line checks a lot of boxes for me. How products are made and where they are made is important to me. What makes my heart pitter patter is the design of the packaging- it really is artwork. The product is top notch, the quality is top notch.” Three years ago, the Beekman Boys even made a personal appearance in Downtown Saratoga coordinated by Keeley Ardaman DeSalvo (Savory Pantry) and Heidi Owen West.

Alan’s excitement about producing their next large event “The 24-Hour Holiday Marathon” is contagious. Carr-Hughes Productions, the award winning Saratoga Springs broadcasting team, will air 24 hours of live TV on YouTube, Beekman1802.com and Facebook Live on December 4 and 5th from the Sharon Springs Mercantile location. Artists and artisans will showcase their work; employees will demonstrate various skills from gift wrapping tips to making charcuterie boards. New products will be shown and the ever popular “goat cams” will showcase the famous farm goats.

Anna enthusiastically described the upcoming Special Deliveries holiday theme.  Beekman 1802 wants to help create a personal gift for your neighbor or friend, rather than giving a cookie cutter gift. “Adding personal touches like hand wrapping or a beautiful ribbon to our Beekman 1802 simple luxuries is a way to spark joy in everyone on your list,” explained Anna.

Simple concepts such as a no electronics lunch where everyone gathers for casual conversation is appreciated by employees.
“We have a unique space here. I feel it’s the way all businesses should run- supporting great ideas, supporting people in their dreams and helping neighbors,” concludes Alan.

Who could ask for a better neighbor than that?