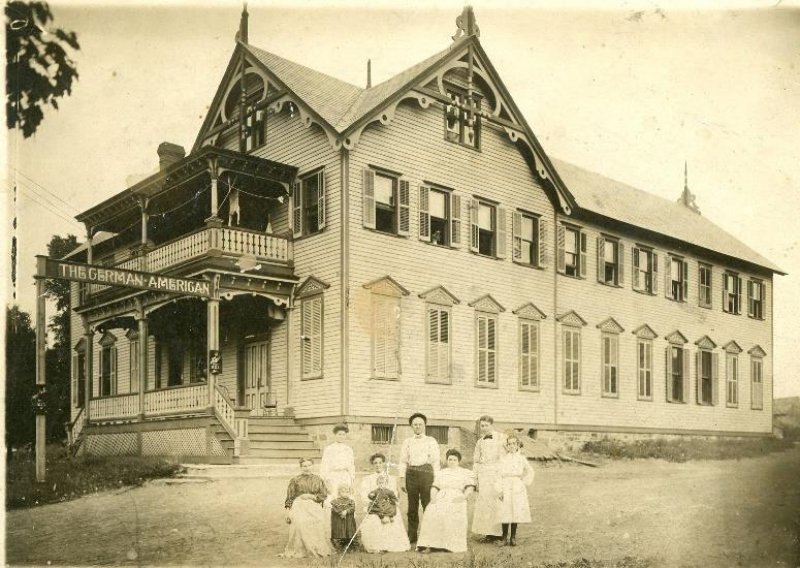 In the early morning hours of July 4, 1919, a fire alarm was sounded in the village of Corinth.  Many residents believed it to be some boys celebrating Independence Day a bit early.  However, when the International Paper Mill fire whistle sounded everyone knew it was not a prank.  The popular German-American Club on Pine Street was ablaze.  The local fire companies fought the fire and kept it from spreading to other buildings, but the large clubhouse could not be saved.

The German-American Club was constructed about 1890 on lower Pine Street next to a creek.  Many German immigrants had come to Corinth to work in the Hudson River Pulp and Paper Company, (which became part of International Paper Company in 1898), in the last quarter of the nineteenth century.  Settling along Pine Street near the mill, the Germans created a stock company that provided health insurance for their members as well as establishing the club house.  The three-story wooden structure housed an opera hall, bowling alleys, billiard parlor, basketball court as well as rooms to rent.  It became the social center of the community – picnics were held on the spacious lawn under the nearby pines.

In 1896 dancing instructions were offered with both stage and ball room lessons given on Monday afternoons and evenings. Participants could ride an omnibus to and from the club house. Bowling and shooting matches were held here, too, with prizes ranging from oil painting to boxes of cigars and beer.  Both a Germania Glee Club and Germania Quartet gave grand concerts.  Other community organizations used the club house for events including the Republican Party which had a grand rally here in support of William McKinley.  The local fire companies held dances and festivals at the club house, too.

The property was later acquired by Pat Brady and by the time of the fire Edward Flynn owned it with William Flynn managing it. By 1914 it was known as the G.A.Club House since Germans were becoming unpopular leading up to the First World War.  The Irish immigrants that lived on nearby lower Palmer Avenue (known as Cork Town) frequented the club house where Fitzgerald’s Famous ale and lager were on tap.

In November 1917 John Flynn was arrested for serving two men who claimed they were looking for work at the paper mill.  The men asked for something to drink and were given “near beer.”  When they asked for something stronger, they were provided with liquor.  At that point the two men identified themselves as state troopers.  Flynn was arrested and charged with a violation of the liquor tax law of New York.

On the evening before the fire William Flynn had locked up the empty building before going to Glens Falls Hospital to be with his wife and sick infant.  It was suspected the fire had begun in the stock room from a defective electric wire and spread to the rest of the building.  The loss was estimated at about $15,000 and there was some insurance coverage.  The fire showed the community that new fire fighting equipment was needed and a new system to alert the volunteer hose companies had to be created.

Rachel Clothier is historian for the Town of Corinth, operates the Corinth Museum, and is retired from Crandall Public Library in Glens Falls.

More in this category: « Amasiah Ford: A Veteran of the War of 1812 who Fell on Hard Times The Bell with a Story to Tell »
back to top