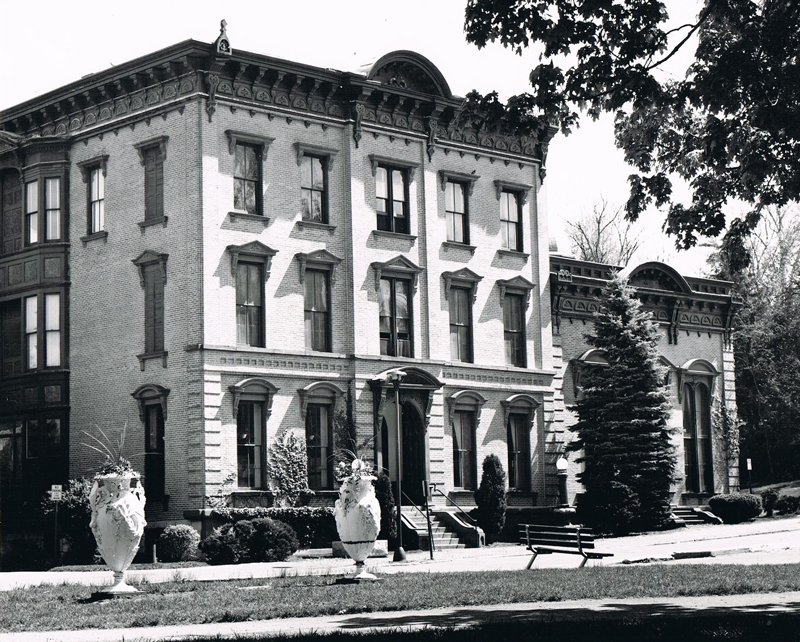 In the year 2019, the silhouette of the many grand hotels and some of the Victorian architecture that was the trademark of the city in the 1800’s is missing. We are fortunate to still have a wonderful example of the architectural style offered in those magical years in the form of the Canfield Casino, located in Congress Park.

What is known today as the Canfield Casino opened in the summer of 1870 at a construction cost of $190,000, known originally as the “Saratoga Clubhouse” under the management of John Morrissey. It was always Morrissey’s intent to use the beautiful venue as a gambling casino, but since gambling was illegal in the city at the time, Morrissey presented the space as a men’s club. In order to ensure that the wealthy would be impressed with the building, Morrissey used the top interior designers of the time, the Herter Brothers of NYC and Mitchell Vance was asked to do the lighting. In 1870 as the top design company, the Herter Brothers also did the White House and many of the homes of the wealthy in America. Today the Canfield Casino is one of only three remaining commercial structures in the country designed by the Herter Brothers.

Admission to the building was to members who paid a seasonal membership fee of $200 per person. Gambling was always limited to men that were non-residents of Saratoga Springs. In that era women of high social status generally did not wish to be seen in gambling spaces, and the exclusion of locals prevented anyone from losing money that might return to protest the operation. A truce was made with local religious leaders by suspending gambling on Sundays. Morrissey also returned money to the community at the end of each summer season by donating some of his profits to churches and non-profits in the city.

At the conclusion of the first summer the experiment proved to be a monetary success as well as a hit with locals, so plans were made to build additional gaming space in the form of a parlor that would be available for the summer of 1871. In May of 1878 John Morrissey died of illness on the second floor of the Adelphi Hotel, and partners Reid and Spencer operated the venue until it was purchased by New York City gambler Richard Canfield in 1894 for $250,000. Canfield raised the elegance of the building by adding the ballroom, which operated as a restaurant, and the Italian Gardens in the park for about $800,000.

Anti-gambling sentiments both locally and nationally started to pressure the closure of the Canfield Casino in the early 1900’s. Under intense pressure Richard Canfield finally put the Casino up for sale. Finally, with no purchase offers, the City of Saratoga Springs bought the building and surrounding land in the park for a bargain price of $150,000 in 1911. This iconic building is still owned by the city today and is continually updated and repaired by the Saratoga Springs Department of Public Works with great care and understanding of its importance in the history of the city.

In the summer of 2020, the Canfield Casino will be celebrating its 150th anniversary of being a notable location and jewel of the city. Today, daily tours of the building are offered by the staff of the Saratoga Springs History Museum that provide additional facts on the structure as well as a glimpse into the famed history of Saratoga. In 2010 another twist was added when the Canfield Casino was investigated by the TV show “Ghost Hunters” to explain frequent observed paranormal activity. Since that time, ghost tours have been offered on Monday, Wednesday and Friday during the summer at 11 a.m.

As you plan your summer activities, put a stop at the Canfield Casino on your list to enjoy the true feel of Saratoga Springs history.